The Devil and the Good Lord

Religiosity permeates Goethe’s Faust, but in such a way that makes it difficult to squarely assign it a Christian perspective. Over the succession of different translations and especially the illustration cycles, vastly different ways of treating Faust’s Christian motifs emerge. 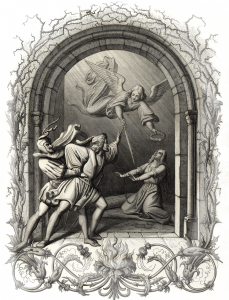 In the translations, one remarks an interesting contrast between the respective treatments of this question in France and England over the early 1820s. So it was that Sainte-Aulaire could judge the Prologue in Heaven, which depicts God and Mephistopheles betting on Faust’s fate, to be “deeply strange.” He likewise calls the Witch’s Kitchen scene “incomprehensible” and the Walpurgis Night Sabbath “even less comprehensible.”

Sainte-Hilaire went as far as excluding this scene from his translation, including instead a previous translation in an explanatory note. At the very same moment, Percy Shelly was translating two scenes from Faust into English—the ones that most captivated him, the very same Prologue in Heaven and Walpurgis Night.

The illustration cycles reveal a similar tension. Certain artists manifest, through their choices of which scenes to illustrate, a predilection for points in the story which lend themselves to Christian imagery. Unsurprisingly, a great many of these are church scenes, or the image of Margaret in prayer before the Mater dolorosa.

Others take the opportunity to represent the splendour of the angels surrounding Margaret at the moment of her death, even though Goethe’s describes only a “voice from on high” announcing the salvation of his heroine.

There are also no fewer than ten illustrators in our corpus who, in the scene titled A Promenade, depicting a priest to whom Martha and Margaret show the ornate box they have just received. This priest is not, however, a character in the play, but is merely mentioned during a discussion between Mephistopheles and Faust.

Many other illustrators show little interest in applying their images to Christian orthodoxy, devoting hardly any of their efforts to priests, angels or crucifixes, but applying their energy instead to the Witch’s Kitchen and especially to Walpurgis Nighthttp://bodmerlab-dev.unige.ch/download_file/view/96.